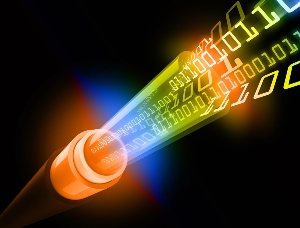 40 Gigabit Ethernet, or 40GbE, refers to the speed by which data is transmitted over the Internet: 40Gbps, or 40 gigabits per second.

Phone carriers such as AT&T and Verizon currently operate on 40 gigabit ethernet networks. 40 Gigabit Ethernet was approved by the Institute of Electrical and Electronics Engineers (IEEE) in June 2010.

In mid 2006, a non-profit organization of nearly 400,000 electronics professionals coming from around 150 different countries started a proposition to start publishing 40 Gigabit Ethernet technology.

This organization known as the IEEE or the Institute of Electrical and Electronics Engineers was responsible for the Ethernet standards that brought us the fastest data transfer technology known to man.

The IEEE’s proposal was to exceed this technology’s rate of 10 gigabytes (10,000,000 bytes) every second with 4 up until 10x the speed. Because of the clear beneficial outcome of the vision, the project was started in late 2007 and a distinguished task force was formed.

The project was called the 802.3ba standard. And its main objective was to release speeds faster than the 10GbE technology, specifically in 40 and 100GbE.

The 40GbE technology is directed to be used by local servers which usually need smaller service capacities when compared with internet servers to which the 100GbE technology was targeted to.

Although there are already 40 Gigabit technology being implemented by means of combining four 10GbE technology into a single mode, the aspired 40GbE is completely different. It is patterned to be like a single conventional 10GbE technology, only it will be four times the bandwidth capacity.

Having been en route for almost three years now, the project has definitely been productive. As of February 2010, the 802.3ba task force has released nine drafts, all of which successful although not yet perfected.

The task force remained loyal to their aim of providing faster data transfer speed and yet still be compatible with the base 802.3, which was the original interface for the 10GbE technology.

And just like its ancestor, the 40 gigabit Ethernet technology boasts being conducive with various physical layer (PHY) standards. With the use of certain detachable modules and adjustable circuit boards, the 40GbE could provide steady connections between devices despite different range in distances.

The 40GbE technology is still not believed to be officially published until the middle of 2010, presumably in June. None the less, restrained modules are already made available by certain technological companies for various sales and testing since 2009.

At this rate, it could definitely be anticipated that the 40GbE and 100GbE will change yet again another course in the history of information sharing.

If the default 10GbE has already made a blast with its superb speedy performance, it is certainly to be expected that the 40 Gigabit Ethernet technology will blow the minds of a lot more people.

40 Gigabit Ethernet in the News

In July 2008, Sprint, the third largest carrier of the four top national carriers, adopted 40 Gigabit Ethernet for its network. Sprint has been at the business of adopting faster data speeds for its network for some time.

Not only did it build the first fiber network in the 1980s and 1990s, but it also launched an “ION” voice and data service before discontinuing it three years later. While Sprint also owns a “WiMax” network, its Xohm network has had data overload.

Clearwire has been another source of data for Sprint, but with growing numbers of customers adopting smartphones and tablets, the need for greater speeds is growing. According to Stacey Higginbotham of GigaOM, it is necessary to put 40 Gigabit Ethernet into perspective:

“To help put the speeds in context, a 40 Gig E backbone will be able to carry 3.2 terabits of data per second.

That’s a lot of cloud services or HD video via iTunes, but Internet consumers are demanding it” (Higginbotham, “Sprint Bets Big on Super-fast Broadband”).

The new 40 Gigabit Ethernet switch was known as the Dell Force10 MXL 10/40GbE switch and marked the first time that Dell produced a product bearing the names of both Dell and Force10 (the company Dell bought out).

One of the reasons behind the ECIX decision to upgrade its network to 40 Gigabit Ethernet had to do with the growing popularity of 100 Gigabit Ethernet. ECIX has a bandwidth of around 100 gigabits currently.

Fraunhofer and Karlsruhe Institutes Send Data at 40 Gigabits Per Second

Local area networks rely on WiFi and are usually in the Mbps (megabits per second) range. However, The Fraunhofer Institute for Applied Solid State Physics and the Karlsruhe Institute for Technology transmitted data over the distance of one kilometer at a speed of 40 gigabits per second just a little over a week ago (May 22, 2013).

This leaves hope for the future that faster data speeds will take place over local area networks. Even home Internet speeds will increase in the days and years to come.