Which Sip Phone Is Best Suited For Your Business

In order for you to enjoy the benefits of SIP VoIP (Session Initiation Protocol Voice-over Internet Protocol), you must have a SIP enabled telephone system or SIP phones that can support its features.

If you own a really big corporation that has its own Private Branch Exchange (PBX), then you can do this from acquiring a SIP trunking service from a provider.

But if you only own a medium to small business size, or even if you are only thinking of acquiring the SIP VoIP technology for your private use, then the SIP phones are what you should opt for.

But you should know that there are different kinds of SIP phones that you can choose from, and each of them has their own line of specifications.

Now, how will you know which one is for you?

The very first type is the software-based SIP VoIP soft phones, which are the ones that use the integrated sound output and input (speaker and microphone) software from your computer to be able to make or receive a phone call.

Examples of these are the 3CX VoIP phone for Windows and Xten.

The next type is the USB VoIP phones.

These are phone-like devices that you will have to plug-in to your computer for usage. They function basically just like soft phones but they have their very own microphone and speakers to use.

And then there are also the Hardware SIP Phones, which already have their needed hardware connections inside them.

They also have their own networking features so you wouldn’t need much aside from your computer’s internet connection.

They also look just like a typical household telephone, which makes it more efficient or users to operate and use them.

So now do you know what type of SIP phones will suite your needs best?

At the end of April 2013, BlackBerry (formerly Research In Motion, or RIM) released a v.1.6 update for its Taki VOIP SIP phone on the BlackBerry 10 platform.

The new update now supports the BlackBerry Q10 and BB Z10, shows all contacts, and adds some UI improvements.

On May 22, 2013, CoreDial LLC, a cloud service provider, announced that SIP phones from Yealink, a top 5 SIP phone provider, will be supported on its cloud platform.

The first commercial SIP phone was from Snom, and was named the Snom 100. Last August (August 9, 2012), Snom donated its Snom 100 model to the Frankfurt Museum for Communication in Frankfurt, Germany. The Frankfurt Museum Exhibit includes exhibits such as New Media, Radio, Television, Telephone, and Telegraphy.

The Snom 100 first debuted at Germany company CeBIT in 2001.

The Bria SIP Phone is a phone app that’s available for the iPhone and iPod and is merely an SIP phone. In order to make SIP phone calls, however, you will need to have a VOIP service such as Skype, GTalk, or some other.

Grandstream was mentioned earlier as one of the top SIP companies known for its SIP phones. In 2010, Grandstream decided to release an inexpensive VOIP phone called the GXP1450.

The phone’s initial selling price was $139.

In March 2011, the Japanese manufacturer Nakayo released an SIP phone to operate with a tablet (similar to the phablet concept that has made Korean manufacturer Samsung so famous). The phone has a handset similar to traditional landline telephones but has a seven-inch Android tablet along with it.

Consumers could choose to have either the handset and tablet or just the tablet. The 7-inch Android tablet ran Android 2.2 (Doughnut), had a 3-megapixel CMOS censor, 256MB of random access memory (RAM), and had a WVGA screen resolution.

This would be useful for companies that use a lot of voice over Internet Protocol services. TextPlus has plans to expand beyond their North America consumer base and into Europe in 2014.

“TextPlus’ enterprise appeal just doesn’t stop with a call center. Rather, the technology could also be used within third-party applications similar to Twilio’s platform.

Additionally, what if social networks like Yammer, Jive, and Salesforce integrated textPlus into their offerings, enabling internal teams to easily communicate with one another right from within the company’s apps without needing to exit out to make a phone call?” (Ken Yeung, “Cloud Carrier textPlus is working on a SIP calling solution and will expand into Europe this year”)

In November 2009, Mountain View, California company Google Inc. purchased company Gizmo5, an internet-based calling company that produces VOIP software. In Taylor Wimberley’s article, he claimed that Google’s purchase of Gizmo5 was so that Google could take on Skype with a VOIP-calling service of its own.

In December 2011, the leading VOIP supplier VoIP Supply LLC announced the addition of Panasonic SIP phones to its SIP phone lineup. VoIP Supply not only added Panasonic phones with LCD screens, but even added a hybrid SIP phone solution that included a cordless handset so that workers could roam around the office or city without being tied to their desk constantly. 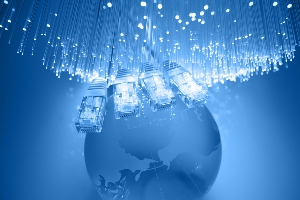 What is Dark Fiber? 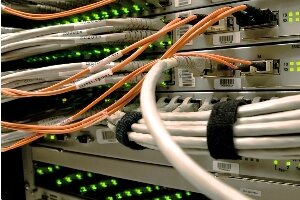 Ethernet Switching refers to the process of connecting multiple devices[...]