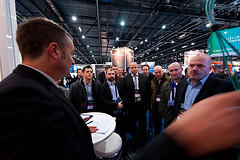 100 Gigabit Ethernet, or 100GbE, is an Internet Protocol (IP) standard that provides data speeds up to 100 gigabits per second. 10 gigabit ethernet (10GbE) has been around for a few years, but the Institute of Electrical and Electronics Engineers (IEEE) met in July 2006 to find faster speeds for Internet data. In June 2007, a “Road to 100G” trade group was formed in Chicago after the NXTcomm trade show.

“The purpose of this project is to extend the 802.3 protocol to operating speeds of 40Gb/s and 100Gb/s in order to provide a significant increase in bandwidth while maintaining maximum compatibility with the installed base of 802.3 interfaces, previous investment in research and development, and principles of network operation and management. The project is to provide for the interconnection of equipment satisfying the distance requirements of the intended applications” (Wikipedia).

In brief, the goal of the request was to call for an increase of data speeds from the 10GbE that so many have enjoyed. In January 2008, the “Higher Speed Study Group” was renamed “the IEEE 40Gb/s and 100Gbs Ethernet Task Force.” On June 17, 2010, the 40GbE and 100GbE standards were approved.

What are the benefits of 100 Gigabit Ethernet? There are two major benefits: (1) fast data speeds and 2) reduced costs.

First, 100 Gigabit Ethernet is faster than current IP standards of 10GbE (10Gbps). Faster data allows consumers and business professionals to receive messages and send them faster. In a world where time flies by, 100 Gigabit Ethernet will allow us to save a lot of time wasted on emails that never get to their intended destination on a given server.

100 Gigabit Ethernet in the News

Since 100 Gigabit Ethernet has only been an IP standard for three years this month, many individuals may know little about this standard and its adoption. The following news events may help to demonstrate how 100 Gigabit Ethernet is being adopted across the United States, Europe, and the world.

San Jose, California start-up company Infinera, in partnership with the University of California- Santa Cruz, demonstrated a 100 Gbps (gigabit per second) Ethernet connection at the Super Computing Show in Tampa, Florida in November 2006, according to tech site GigaOM. The 100Gbps Ethernet connection was conducted by way of Internet signals that stretched from Tampa, Florida to Houston, Texas and back. Infinera was able to accomplish its 100Gbps data speed by “bonding 10 parallel 10Gb/s channels into one logical flow while maintaining packet ordering at the receiver” (Om Malik, “Ethernet Zooms to 100 Gigabit Speeds”).

Juniper demonstrated its 100 Gigabit Ethernet interface at Interop Tokyo in June 2009, as well as in its Herndon, Virginia labs in September 2009. Juniper also demonstrated the viability of its router interface at its computing show the following November.

In March 2011, Verizon Wireless launched its own 100 Gigabit Ethernet network from Paris to Frankfurt in Europe (a 555-mile stretch). While Verizon is credited with the success of launching its 100 Gigabit network, other companies partnered with Verizon to make it happen — companies such as Juniper Networks (who provided the wireless routers) and Ciena (100 Gigabit Ethernet coherent optical transport equipment). Now that Verizon has successfully established a 100 Gigabit Ethernet IP standard in Europe, it looks to bring 100GbE technology to other areas.

According to Verizon’s Optical Transport Network Architecture and Design Director Glenn Wellbrock, however, bringing 100 Gigabit Ethernet to the world is something that will not happen overnight. “That’s [100 Gigabit Ethernet] a whole lot of bandwidth, and networks don’t need 100 Gigabit everywhere. But certainly it is the kind of thing that we look to leverage going forward. We really think that 100G will become the new industry standard for large connections in the core of the network” (Lance Whitney, “Verizon Launches 100G Ethernet Network”).

A 2012 study conducted with 1,529 IT leaders from both North America and Europe demonstrates that many IT leaders believe 100 Gigabit Ethernet will be adopted by 54% of all IT departments on the two continents by 2016. Eighty-one percent of respondents claimed that bandwidth is one top problem facing data centers, and approximately half of all IT leaders believe that network overload is imminent unless bandwidth increases.

What is causing significant network overload? In a word, data. Fifty-three percent of IT leaders who participated in the survey believe that bandwidth demand has increased due to cloud storage and cloud computing. Data, when processed, is often moved to the cloud in order to retain necessary information in case an email or document is lost from one’s local memory storage on a computing device.

The Advantages of Using a Hosted PBX

A PBX (Private Branch Exchange) refers to telephony system where[...]

Introduction To Ethernet Wireless Adapter Today we are living in[...]